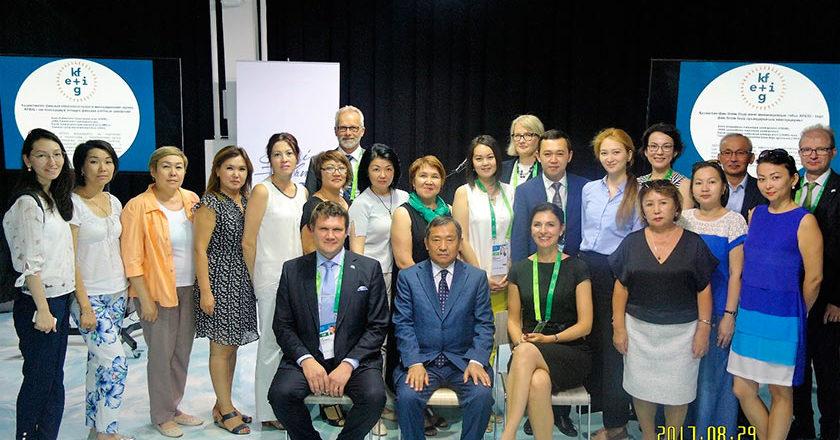 According to the Central Asia Research Forum series (2017), Kazakhstan as the ninth largest country in the world is a large emitter of the greenhouse gas emissions. In addition, Kazakhstan is regarded as one of the five carbon-intensive countries with 70 to 75% of the electric power generated by using coal. The world’s average carbon intensity is about 0.58 kg of CO2 emitted per USD 1000 of economic activity, in comparison with 2.59 kg in Kazakhstan. Table 1 shows some interesting facts about Kazakhstan.

In 2013, President N. Nazarbayev approved a National Concept for Transition to a Green Economy, an ambitious sustainable development paradigm. The Concept aims at an economy of increased wellbeing of the Kazakhstani people while it alleviates the impact on the environment and degradation of scarce resources. By adopting the principles and goals of the green economy concept, Kazakhstan may become one of the 30 developed countries in the world. At the same time, it is expected to increase the GDP of the country by 3% and create over 500 000 new jobs by 2050. The reasons behind the need of “greening” the economy is the overall deterioration of natural resources noticed in every sector in Kazakhstan, leading into potential yearly economic losses of USD 7 billion by 2030. (CONCEPT 2013)

The transition toward a green economy is implemented through several strategic program documents, such as the Strategy Kazakhstan 2050 with bold targets:

The Concept also identifies six main principles in the transition to a green economy:

In the Concept (2013), Kazakhstan acknowledged education as a powerful driver of the transition and environmental culture development of its nation. It promotes education reforms and development of a new modern education system and vocational training (CONCEPT 2013, 9). Due to Kazakhstan’s resource-intensiveness, it is essential to educate a substantial number of professionals with expertise in environmental protection and resource productivity. Therefore, these lacking areas of expertise should be included in the curriculum of all engineering education. For thousands of existing engineers, and other involved parties, such as authorities and farmers, on-the-job training and further education could develop their skills. Furthermore, the environmental awareness and education of the general public is fundamental for creating a new eco-culture concerning the consumption of energy, water and other resources, as well as waste separation. Here, it is vital to spread information on resource usage and environmental problems. Finally, “greening” the curricula of the primary and pre-school education will contribute to increased environmental awareness. (CONCEPT 2013, 48)

Finnish education is regarded to be one of the best in the world and a pioneer in the Cleantech and environmental sectors, both in know-how and education, as well as technologies. These facts, well recognized in Kazakhstan, give Finnish education institutions and companies, immense business opportunities in developing curricula at all levels, pedagogical education, and learning environments (Finpro 2017).

The uniqueness of the Finnish education was also presented at the international exposition EXPO 2017 in Astana, Kazakhstan from June 10 to September 10. Finland was the only Nordic country exhibited in Astana. Altogether, there were 3.8 million visitors at the world exhibition, and 300 000 of them explored the Finnish pavilion. The Finnish pavilion, Sharing Pure Energy, was designed by Ateljé Sotamaa and was awarded with a gold medal for theme development in the category of pavilion with less than 400 m2 (Finpro 2017; Garton 2017). At EXPO 2017, the Kazakstani-Finnish Education and Innovation Group, shortly KFEIG, represented Finnish higher and vocational education.

The KFEIG Consortium offers a wide range of education related services, from Bachelor’s and Master’s degree programmes, open studies, continuing education, competence-based vocational secondary education to teacher training and consultation. KFEIG also cooperates with one of the largest global education financiers, the World Bank, in international education projects in developing countries. JAMK and LAMK have been cooperating with the Ministry of Healthcare and Social Development of Kazakhstan and providing its expertise and development in the healthcare education already since 2012. (LAMK 2016; Malinen et al. 2017)

KFEIG aims to strengthen its position in Kazakhstan and extend the cooperation to other areas of education, such as environmental education and teacher training (Malinen et al. 2017). During EXPO 2017, KFEIG organised a series of three VIP Days in the Finnish Pavilion. The themes of these VIP Days were healthcare (21.8.2017), teacher education (25.8.2017) and Cleantech education (29.8.2017).
Figure 1 is a photo taken during the Cleantech Education VIP Day in Astana on 29 August 2017.

Finland as a pioneer in Cleantech expertise has an enormous opportunity to share knowledge with Kazakhstan and other developing countries. In Finland, the progress in environmental issues has taken over 20 years. Due to education export in these fields, developing countries may reach a high environmental performance level quickly. However, it requires a tailor-made cooperation to fulfill the specific goals.

Currently, Finland is paying attention to resource preservation and circular economy. It is important to acknowledge that these terms might not yet be recognized in other countries. Therefore, it is worthwhile to point out challenges related to national and cultural differences. For instance, when exporting Cleantech education to Kazakhstan, it is better to talk about green economy rather than circular economy. After all, we would like to point out, that due to a success in healthcare education in Kazakhstan, as well as good reputation of Finnish education and environmental performance, Finland has a huge opportunity to begin education export in the Cleantech sector.