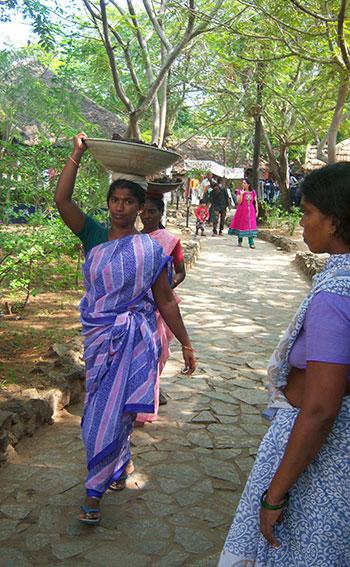 Many companies and educational organisations in Finland are interested in the possibilities of exporting education to new countries. The Finnish school system has a good reputation all over the world. In this article, we will concentrate on India, as one of the authors is originally from India and he is currently working in the education sector. Professor Adaikalam represents the Loyola College Chennai, faculty of social work, and he addresses the topic from the Indian culture’s point of view.

India has rapidly become a major player in world economics. Nowadays, it is one of the largest economies in the world, and over the past two decades it has seen millions of people rise to higher socioeconomic classes. Development steps have also been taken, especially in the health and well-being sectors. India is a developing economy. Two-thirds of the population still live in rural areas, which poses challenges especially for vulnerable groups, regarding people’s access to services.

India has put a lot of effort into developing its school system. The entire school system in India is under a digitalization process, which means that schools of all levels need new kinds of technology and tools, but also an understanding of new needs of learning. It is possible that digital education technologies will eventually revolutionize the way we learn and teach. The problem in India is that best educational practices haven’t been scaled nationally, or the scaling is happening too slowly. One example of this is the fact that 1/5 of Indian children in fifth grade are not able to read simple words. Despite massive investments in developing the education system, learning results have not improved. Pritchett talks about the learning crisis, which he sees as a barrier to economic growth in developing countries (Pritchett 2013).

The population of India has grown quickly, and India has a large amount of young people. India is considered to be one of the world’s fastest growing Internet markets, and it will reach over 300 million Internet users by 2017.  Today, there are more households in developing countries with a mobile phone than with access to clean water. One year ago, the Indian government launched a program to transform India into a digitally empowered society and knowledgeable economy. The purpose of the government’s Digital India initiative is to make government services better available to citizens electronically by improving the online infrastructure and increasing Internet connectivity. At the same time, western countries are exporting their business such as digital learning platforms to the Indian markets. The country’s growing GDP and business opportunities especially in the healthcare and wellbeing markets attract many Finnish companies.

The effects of technology and its productivity expansion for the poor and the middle class, as well as the spreading of accountable governance, have so far been less than expected. Inequality is increasing, as better educated, well connected and more capable people have received most of the benefits. It has been noticed that the utilization of ICT-related products, services and research results from high-income environments entails challenges, especially in remote and low-income communities. An example of this is a project implemented in Peru, where all students of rural schools received computing equipment, but this did not bring any evidence of increasing learning skills in maths or languages. Hardware-centric educational technology projects planned and implemented in highly developed environments for use in developing countries without paying sufficient attention to local contexts are difficult to execute successfully. (World Bank group 2016.)

[easy-tweet tweet=”There are more households in developing countries with a mobile phone than with access to clean water. ” hashtags=”uasjournal, digitalization”]

The worst scenario regarding the export of education would be that citizens in developing countries become disappointed with the education system. At present, people already feel that education wastes their time and lecturers do not offer them access to working life. Another challenge is the quality of studies – there might be a lack of good pedagogical methods or not enough interest in investing teaching. Degree studies take time, and this is time that students could spend working and earning money for the family.

It is extremely important to carefully plan the digital transfer related to learning environments and education. The Indian school system consists of schools of different levels: At one level, schools are completely managed by government agencies. Another level is funded by the government but managed by foundations in a non-profit way. The third level consists of schools both funded and run by foundations on their own. Evidence shows that the mushroomed economic growth in India has concentrated on private schools and colleges and certain regions in an urban-centric way. The quality of education is the top priority, especially in remote areas and among the socially disadvantaged. Technology penetration is particularly crucial in these areas, and western countries have to take responsibility for exporting products in a sustainable way.

Digital tools and platforms in education could offer benefits for developing countries. The Indian government and the states of India have ranked education as one of their priorities and the education system has expanded a lot. Investments in the education sector need to be made to guarantee a skilled and professional workforce. The Government has launched programmes and initiatives to reduce gender inequality, promote girls’ schooling and improve the standard of education. The Indian education sector consists of a number of actors representing the central government, state and regional bodies, as well as private-sector operators.

Indians are well aware of Finland’s high performance in the PISA (Programme for International Student Assessment) survey, and this offers good opportunities for cooperation in the education sector. Cooperation between educational organizations and businesses opens up prospects for companies to cooperate with each other. Especially digital learning solutions have great potential in Indian markets. When it comes to exporting education, the most important aspect to take into consideration is to understand that products need to be transformed in a suitable way to the specific society and culture.

A good way of exporting the digital education system to developing countries would be to use existing technology, which is available in the local environment and familiar for the local people. In addition to the successful export of digital education and ICT tools, it would be important to motivate and guide teachers and other key persons to use the exported technology in beneficial ways in the future. Supporting teachers and paying attention to pedagogical methods and curriculum material would offer a framework and understanding for the importance and possibilities of new technology. (World Bank Group 2016.) As Finland is boosting its educational export and many companies are planning to expand their business to developing countries, the authors of this article would like to emphasise the importance of paying attention to local environments and local citizens’ ways of living and behaving in those environments. Conducting user-centric surveys before expanding a business idea is not always enough, but extensive research implemented in collaboration with local people would support digital exports, even though it takes extra time, because this enables large-scale business transactions that benefit local people as well.

Education export should be based on understanding the needs of India’s ecosystems. A holistic perspective might be a good approach for looking at these ecosystems. A holistic approach to humans and societal development consists of essential elements such as the participation, agency and empowerment of people and enterprises, and these elements could help with the exploitation of digital tools. According to the OECD’s approach, holistic wellbeing includes physical, mental, emotional and social factors, as well as happiness and life satisfaction (OECD 2015). Without these elements, any digital products exported to developing countries will not scale and be implemented in practice successfully.